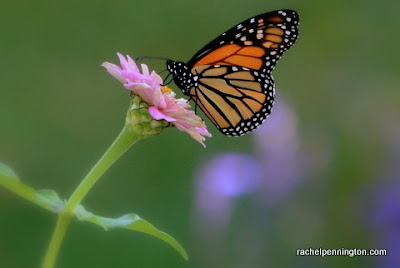 I took this shot at my Daddy's house today. They still have lots of butterflies fluttering about up there on the mountain.

This morning, at a little after midnight, I was JUST falling asleep, but was still a bit awake, too. I was aware that Marshall got out of bed and heard him close the bathroom door. Just a minute or so later I heard him coming back and then I heard these loud noises outside about the same time Marshall got back in bed.

Our bed backs right up to a window that looks out over our driveway. We have a partial view of the road. We saw two guys hitting the window on Kandi's truck, which is in our yard. Before either of us thought, we both yelled at the guys and they ran the few steps back to the road, and into a white van. They jumped in the side door and the van took off.

It's a shame they were so stupid because they were RIGHT under the streetlight, which is at the end of our driveway. We were able to see them clearly, and their van, too. Idiots.

I called 911 and it just so happened that there was an officer in the neighborhood. 911 called me back a few minutes later and told me that the officer had found the van and that one of the men got out and ran. She said that they were tracking the guy with a K-9 officer.

The officers caught the guys, five of them, then came here and picked Marshall up so he could ID the van and had him point out which ones we saw in the yard. Marshall said when the officer shined the spotlight on them that they were laughing and acting all cocky. I can't say the word here that I want to call them.

The jerks (criminals) are now in jail with felony charges pending against them. The officer told hubby that a couple of them stay in trouble all the time. We will be pressing charges.

I'm VERY happy that they were caught, but of course now I'm terrified that they will eventually try to harm us; the officer already said they were nothing but thugs. :( Believe me when I tell you that if anyone steps foot in this yard at night again and I feel that they are going to harm me, or do any harm to my property I WILL shoot them, and I ain't even playing. We already have guns in the house and this week we're going to get a pistol, too.

I love my house, as you all know, but I will not live in a place where I'm scared. I've been SO proud of me because I've been able to stay here by myself lately when Marshall has to work out of town. It took me 30 years to get to that spot. Now, that's all gone. I won't ever stay here by myself at night again. I'm FURIOUS that I no longer feel safe in my home. No, they didn't try to break in the house, but what will they do now?! They KNOW it was us that called the police and obviously they know where we live.

All of my friends and family know that I've always had this horrible fear of someone breaking in and murdering me in my own home. That fear stems from something that happened when I was very young, that I've never managed to get over. The event was very traumatic for me and still haunts me to this day. Anyway, I'm just really aggravated by all of this.

That being said, what kind of idiots try and break into someone's stuff when a) there's a streetlight there, and b) at a little after midnight? Marshall still had the tv on for crying out loud! AND if that isn't bad enough, know how the morons tried to break the windows on the truck? With their elbows. ELBOWS!

Ok, so today was lovely. I stayed at home and worked on invoices for Marshall and then headed up to visit with my Dad and my stepmother for a while, then headed out to see my in-laws. Marshall was already there. He is helping his Dad lay floor tile in their kitchen.

We visited with them for a bit, then headed on home. Tomorrow we're going back out there, but I plan on getting up really early in the a.m. and doing a bit of laundry, and sweeping, mopping, and dusting before we go.

The weather is in the low 80's again. I hate it. :( I think it's supposed to get cooled back off by the end of the week.

Have a good night! Don't try and come here and spook me just for fun because I might blow your knee cap off. :D

NIGHT! :)
Posted by rachelpennington at 9:39 PM

I do understand your fears. I had gotten very edgy at night myself when Don worked at night, before we sold our house and moved into an apartment complex. After that, I wasn't afraid. I don't understand why the police handled it the way they did.

Unfortunately there is a lot of meanness in the world. Fortunately it is often accompanied by stupidity, so that gives folks like us the upper hand. Times are tough - even little old peaceful me has considered getting a gun (don't tell Jen).

Rachel, if I land the security guard job, I'll come over and whupp arse for you.

No one should ever have to live in fear.
No one.

take a gun safety class. learn to use it. then go target shooting regularly. you will be amazed at how much better you will feel when you can protect yourself and those you love, with competence. think bout getting a concealed carry permit. I can't get one here in los angeles but i don't let lack of a permit stop me. i have to be alive for them to prosecute me, ya know?
and don't bother with a kneecap shot. always go for the central body mass.easier target and it removes the threat.
and, also, most important, if you feel you cannot kill someone to protect yourself or those you love,, don't get the gun.
love,
Heather

I'm not nearly as anti gun as I once was but I still don't think I'll ever own one but I agree with the Heather person... take a class. You'll feel very empowered.

And as far as not being able to stay there alone... I get that, I do. But by letting those turds do that to you they are winning. But I'll be more than happy to stay with you when Marshall is gone AND/OR you can come sleep with me and Rowan. She'll take up much less space then when you slept with me and E!

I loves and misses you!

Mad's taking me to a gun range soon to teach me to shoot.....I told him from the beginning that I won't live in a house with guns unless I know how to use them....since he has a houseful of guns, guess what? I get to go to shooting practice. :) Want to come with us?

Amen to D's Damn Thugs comment! Send them to my house and Whimsey will eat them alive as puny as they sound. :P And if Whim doesn't scare them off, Mad can march out front while I hide somewhere.