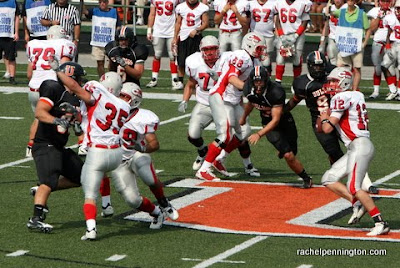 Cain is the second player in black from the right. His team won 57-7. He didn't get to play that much, which was really disappointing. They moved him to a new position, and I don't know WHY they don't leave him put as a free safety. He's awesome in that position.

My aunt and uncle came to watch Cain's team, too. It was miserably hot, but I'm so happy that they came. Cain's girlfriend was here, too, so he had quite a cheering crowd.

We are heading back over to Cades Cove where we are camping with some friends of ours. I wish Cain were coming with us. :(

G'night.
Posted by rachelpennington at 8:55 PM