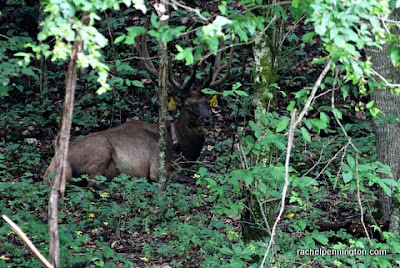 I know this isn't the best photo but what can you do when a bull elk wants to relax in the shade? Nothing, that's what, because those suckers are huge!

So, as you can see we finally saw one. Our first bull elk! I had never seen an elk anywhere ever. I was tickled pink. This one is No. 17, and the ranger told us that the older the elk, the lower the number. I'm not sure how many have been tagged, but I do know that some stupid idiot poached No. 21 last year, and he was one of the biggest elks in the park. Just as a side note, the idiot that shot No. 21 was sentenced to 150 days in jail, fined over $8,300, he is not allowed in the GSMNP or any other national park for 2 years, and they seized his rifle. Personally, I think he should've gotten more fines, more jail time, and to NEVER be allowed back in the parks. I have no sympathy for this fool.

The elk were reintroduced into the Great Smoky Mountains National Park in 2001. Initially 25 elk were brought in, then later another 27 elk were added to the herd. I know that as of 2010, there were at least 25 confirmed births, so it seems like the herd is doing fairly well, which tickles me to bits and pieces.

We're having a fabulous time exploring. If you've read my blog for a while you know how much I absolutely L-O-V-E the GSMNP. I haven't been to a lot of places, but I still can't imagine that there would be too many areas that are prettier than this. :)