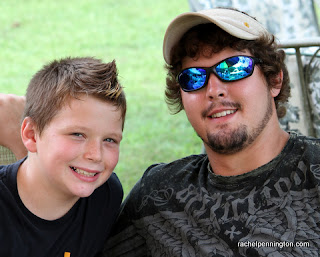 That's my nephew, Jonah, on the left, with my son, Cain.

Over the years we seem to have lost most of our main dinnerware set. Plates and coffee cups seem to have just vanished. I spent most of the day pouring over several websites looking for new plates and the like. I don't know when we will buy any new ones but I'd like it to be sooner than later.

We've had some storms popping up here and there and I'm all about it. I wish all these little storms would've been more spread out over the summer though.

Last night I started watching the series "The Walking Dead" on Netflix. Tonight I finished the six-episode first season. I just realized that Netflix doesn't have the second season! Now what?!  ;)  EVERYONE (it seemed) talked about how good the show is and I did like it pretty well. I'm not sure why, it is about surviving post-apocalyptic zombie land. Doesn't that just sound like a good show?

Night.
Posted by rachelpennington at 10:02 PM

Dinner ware??? :) I have hardly anything that matches and we love it that way!

We had some beautiful lightening shows and then some real rain!!! Whooo!

You watch Zombies?? Okay, sure...you are OK!
Have a great day!