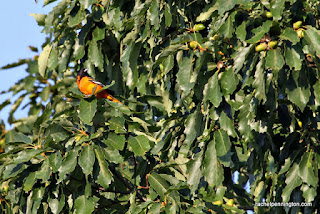 I realize that the title of today's blog might make some of you think I'm nuts (what do you mean you already thought that?!) and I'm okay with that, but here goes.

I've been praying about a lot of stuff lately. A lot of things have been weighing on my mind. I haven't really been asking for a sign from God that things will be okay, but I've been expecting that He'd send me a sign. So...

This morning I went out on my front porch to have my Cheerios and orange juice so I could watch the hummingbirds and everything else while I had my breakfast. After I finished eating I decided to grab my camera. I haven't used anything but my phone to take pictures since we've moved to this house and I wanted to take photos of the hummers.

For whatever reason I decided to sit on the other side of the porch, which is something I haven't done since we moved in. The first thing I see? A bright spot of orange flashing in the trees.  I was stunned when I realized it was a Baltimore Oriole.

So, after I see HIM, I see HER! A pair! I was in Heaven on earth. I truly and deep down in my heart believe that this was my sign from God. My sign that things are going to be just fine, and that the decisions we've made in buying this house are all what is in His plan for us.

I'd tell you that I literally cried for several minutes after I saw the birds, but you'd probably just make fun of me like my daughter did.

Oh, and then I got stung by a yellow jacket so my excitement had to take a back burner for a little bit while I whined and complained about how I felt betrayed by the yellow jacket. I thought they and I had an understanding that I don't kill them and they don't sting me. Rude yellow jacket, huh? I KNOW!

I won't make fun of you because this was so special for you to see! I think the Oriols are migrating now...what a great sight for you!