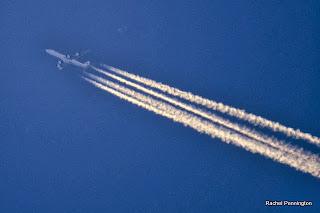 We see lots and lots of planes go over here on our part of the mountain all the time. This one was WAAAAY up there and didn't have much of a trail at all. When we first saw it we thought it was a meteorite headed through.

Did I tell you that we saw a meteorite the night of Cain's wedding? We did and it was amazing. I think they called it a fireball and it was so low that initially we thought it was someone shooting a firework. I believe I read that over 700 people spotted it on it's journey through our atmosphere. It was real special to see at the wedding though. And creepy. :o)

Today after Cain left I got ready and ran and got groceries. I also snuck and ate at my favorite Mexican restaurant because I can't get enough of that stuff. I'm 44 and for 43.5 years I would NOT even consider eating Mexican food. I swear I think they put crack or something in that stuff. It's all I want. Period. Yummy. :)

Posted by rachelpennington at 3:14 PM