River...What Am I Going To Do With Her 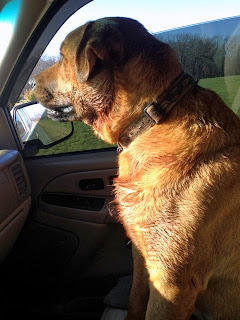 Doesn't my Jack look like Cujo? That's because River attacked him. I didn't know it at the time I took that picture, but the blood on him isn't Jack's. It's River's blood. Jack outweighs her by 20 pounds.

Today was horrible. Just horrible. I don't know what the heck is wrong with River. I truly think the girl has mental issues. She's a Mountain Cur as you may or may not know. She's also a rescue from a horrible situation. While I've had her for almost 3 years now we never know when she's going to snap.

She and Jack play wonderfully together but not today. The FedEx man had came and delivered a package. I walked down to the gate and got the package and we were all (me and the three big dogs) were walking back up the hill. River jumped on Jack before any of us knew what happened.

It didn't matter what I did, I could NOT get her to stop. Jack couldn't get up (even though as I mentioned above he outweighs her by 20 lbs.). I beat her with my walking stick. I fired my gun in the air. She's terrified of guns and she still didn't stop. Jack was able to get up and they still kept fighting. I gave up and ran up the hill to the house. I was going to get some water to throw on them. When I came back out with the water they had stopped.

I took Jack to the vet first because I thought all the blood on him was his. Turns out he only had a couple of puncture wounds on his front legs. While at the vet's office I talked with him about putting River down. I was crying so hard that I could hardly speak. I love River. I love her so much but I can't have an unstable dog when I have five other dogs to be concerned about.

I took Jack home, got River and took her down. She was torn all to pieces. Her face was a mess. She had to be muzzled and sedated and finally put completely to sleep so that she could be stitched up. I had all intentions of putting her down, as much as it absolutely pains me to say that. BUT, in the meantime I talked to my husband and he told me not to put her down. I was shocked that he told me not to but he did. So, instead we will no longer have her with the other dogs. It absolutely breaks my heart because she LOVES playing with Jack and Ranger, but I can't risk their health and well-being.

Please pray for me in this. I don't know if I'm making the right decision, yet I don't know how I could possibly live with myself if I put her down. :( I'm heartbroken.
Posted by rachelpennington at 7:30 PM