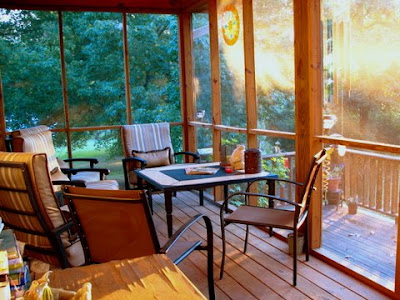 I'm not sure how this photo will actually look on your screen because I think I need to do some major adjustments on MY screen. This new laptop has one of those glossy screens and things are looking quite odd on it. I'd edit on another computer but I just don't feel like it. :)

I woke up at 4 this morning ready to get out of bed. I didn't get up, but boy did I want to. I woke up again at 5:30 and talked myself into laying there, and then at 7 on the dot I practically bounced out of bed.

I felt pretty good this morning and went around the house, lighting my candles (even if I can't smell them, others can), and picking clutter up and putting it away. I opened my back door to let some fresh air in, fixed myself some peaches & cream oatmeal, and then headed out on the back porch with my new Southern Living and Birds & Blooms magazines. I read for about an hour, just enjoying the quiet of the morning. It was perfect.

After a while I came in and caught a bit of the Gaither hour (gospel singing) and then watched one of my favorite shows: CBS Sunday Morning. It was from there I learned that Paul Newman had died. :( What a bummer. One of honey's favorite movies is Cool Hand Luke and he watches it EVERY time it comes on, which is fine by me, because you know, Paul Newman wasn't bad on the eyes. :) We also watch Butch Cassidy & the Sundance Kid a lot, because it's yet another favorite of my hubby's. Anyway, hate that he fought that hard battle and lost. :(

My sweet hubby has been taking such good care of me. I KNOW he has to be tired of hearing me whine about being sick. :) I don't do sick well, but then again, neither does he. Anyway, as it has been every day, I feel pretty good in the mornings (except yesterday, which was my worst day thus far) and then as the day goes on I get worse and worse. I refuse to go to the doctor though. Ugh!

I'm digging this new computer. I haven't felt like playing on it much but so far I'm liking it fairly well. One thing that I will have to figure out is how to get the color right on it. The whites and light colors seem very dull, and the brights are TOO highly saturated. I'll get it fixed though.

Have a beautiful Sunday evening. :)
Posted by rachelpennington at 6:26 PM

What new computer did you get???
I missed that somewhere!

Plus you better get well soon!

I had a wonderful Sunday nite thank you!