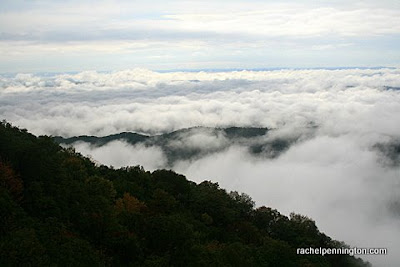 Ok, so when we were up here in Kentucky several months ago, we drove by the motel that we stayed at last night, and I instantly fell in love with it. It is one of those precious old motels, wonderful charm, and friendly folks at the front desk. We canceled our reservations with Comfort Suites that we had made for these few days we planned on spending here in Ky., and immediately made reservations at this little motel.

When we were up here those months ago the motel was PACKED. Every room was booked. Um, this time...this time we were the ONLY ones staying at the motel. What we didn't do last time was ask to see a room. Ever seen "Psycho"? Well, yeah...like that, but no tub, just a shower that *heebie jeebies* I kept my flip-flops on to shower in.

We couldn't just leave because it was too late to cancel the reservations and we REALLY tried to tell ourselves it wasn't that bad. We didn't have phone service on our cells, but that was to be expected, we were just right outside a state park with lots of woods surrounding us. THERE WAS NO PHONE IN THE ROOM! No phones! Anywhere! And did I mention the shower? *shivers* I was up for most of the night and you better believe I popped up at 6 a.m. to take that dreaded shower and to get the heck out of Dodge.

When I looked at Marshall after I got out of the shower, I noticed he had sank down in the bed on his side. Ever see "Nightmare on Elm Street" when Johnny Depp's character is sucked into his bed, or whatsherface's mother disappears into her bed? Yeah, it was like that. Luckily all I had to do was jump up and down on my side of the bed a few times and Marshall popped out like a Mexican jumping bean.

Ok, I might be exaggerating on that last part a little bit, but not by much. They call this place a resort and the only reason I can think that they have the right to do that is because there is a remote for the television. That was the only resort-ish thing there.

We're not staying there anymore. And we never will again. It's a crying shame, too, because it's SO cute on the outside. The location is amazing, too. Oh well...

We left the hotel by 7:30 and were on our way to Cumberland Gap National Park. We visited there a month or so ago, as it's not far from where Cain goes to school. It was SO beautiful there this morning. We got there before as the fog lifted from the valley...it was wonderful.

We left there and found another hotel (with a REAL tub!) and made lunch. We rested for a while and headed back to the town Cain goes to school in because the town is having their annual Daniel Boone festival. We enjoyed walking through there and I even bought a couple of Christmas presents.

We watched Cain's team practice for a bit, then he met us for supper and hung out with us at the hotel room for a while. Now I'm about to snuggle with my honey and watch some football.

Night. :)
Posted by rachelpennington at 9:16 PM

Good thing I wasn't eating beans or I would have shot it out my nose at the mental image of you jumping on the bed.

You have created a mental picture for me Rachel.
Thanks for the good laugh this morning!

That photo is incredible!
What a view, you are sooo lucky.

Your trip sounds like the one I took my hubby on two springs ago...Mountian Lodge in Warm Springs...nothing like the brochure! Didn't want to sleep under the sheets for fear of what might be there-scorpions in the bathroom-a suspicious looking "love tub" that was heart shaped and only 8" from the edge of the creepy bed! yikes, won't go there again. Your picture was beautiful! Enjoy being with your son.
Teresa