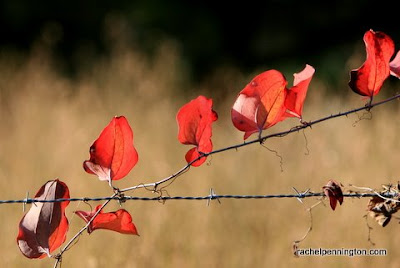 I am not a happy camper today, not at all.

We won't be going to Kentucky this weekend to see Cain play football because he decided to take part in the STUPID homecoming week pranks. He, along with about 60 other kids, got caught pulling pranks and he doesn't get to play football this week.

I'm so mad that I can't even ....can't even do anything, really. This was going to be a special week, with two of my aunts, my uncle, AND my 92-year old grandfather all going up to see him play. PLUS, the tailgating party is roasting a pig.

I put $20 in the donation jar for the pig roast. Marshall didn't know that I did that, and he put in a $40 donation. So now we've paid $60 for a meal we won't even have, all because of some stupid pranks. Also, the leaves up there are probably in their prime for color. I won't get to see those either, because next weeks game is here.

I'm so sad and so disappointed. :(

:(
Posted by rachelpennington at 2:05 PM

There is a silver lining here!!!! Football is so important to him, he won't do something like that again.

Keep on the bright side of life.... (if only I could whistle for you).

So... what ya'll gonna do this weekend? I say we go up to Hiwassee and take a train ride....

Kids will be kids. mmm, don't know what to say but perhaps 10 yrs from now you'll look back on this and laugh about this??

Try to have a good weekend!

Ah! The joys of motherhood! If I were you, I would go anyway...but Cain wouldn't get any of that pig!
This too shall pass. Keep hoping and praying that you don't kill them before you get grandchildren out of them!

Rachel, I am so sorry. It is tough when our kids make dumb decisions... BUT! What they learn from them are sometimes things that we could never teach. :)
Chin up sweetie. This too shall pass.
(((hugs)))
Love,
Chas