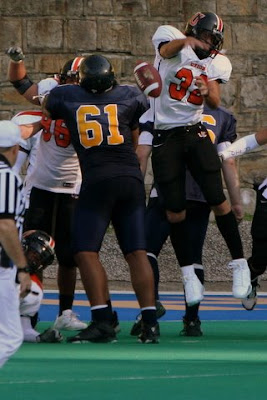 Well, our boys are 5-0 now, having beat West Virginia Tech 45-27. The photo above is of Cain (32) blocking an attempted field goal. Yay! He had a good game. Seeing him play made the trip totally worth it. You can read about the game by Clicking Here.

We have had a fabulous day. Before Cain's game we went to Hawk's Nest State Park. It was so beautiful. The view was lovely. We did see something pretty sad: a doe and her two fawns had somehow gotten into the river and could not get out. We watched them swim in circles for some time, swimming up against the wall of the dam before circling around again. Finally, thank the good Lord, they found their way out. It would've totally broken my heart had they drown. :( Here's one of the photos I took of them trying to find their way out: 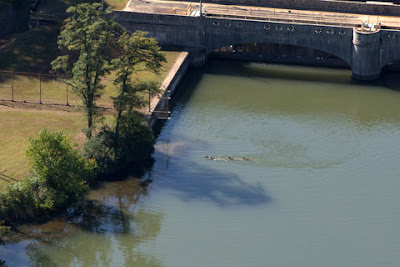 As you can see, we had no way to help them. I'm so thankful they founld their way out (they circled around one more time before finally coming over to the bank to the bottom left of the shot). You can see the two young ones under the sign, and the Mom is juts to the right of them by the tree: 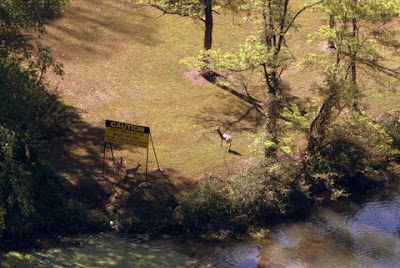 We explored around the area for a bit and then headed back down the mountain to go to Cain's game. We got to see him a little bit before he got on the bus after the game and then we headed out.

Honey has an uncle that lives about an hour from where Cain played so we visited with him and his family for a few minutes, and now we are staying at a hotel in Grayson, Kentucky, just over the WV/Ky line, or at least I THINK that's where we are.

My 18-55 mm Canon lens got crushed tonight. It got crushed against the steps because of some sweet angel on her leash tripping a certain someone up while going up the hotel steps. :( Luckily I have insurance on my camera gear, I just hope it's not a big hassle.

Posted by rachelpennington at 10:01 PM

Congratulations to your boy(s)!

I'm glad those babies made it out of the water. We had some wildlife excitement Sat. morning when I spotted a young buck up in the woods behind our neighbor's house. I went and grabbed my camera, hoping he would emerge from the trees, but I think he smelled or heard Ballou on the back porch because he eventually headed back up the hill.

Virginia Tech!!! That is where 2 of my nephews go...but they are not football players so I guess I can't gripe to you about it.