No End In Sight! 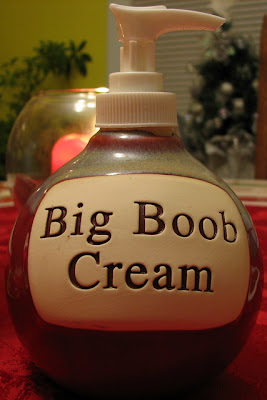 Brooke always jokes about having plastic surgery, so I bought her this for her 22nd birthday (which is this Friday) and I'm going to tell her to see if it works before she spends all that money for surgery (which she only jokes about and would never do). :)

I know that I always say that my house looks like a tornado hit it, and other than the actual structure being torn all to pieces, THIS time I really mean it. There is not a SINGLE room clean in this house, not one. I just don't see an end in sight, but we'll have to get there at some point, right? :(

Brooke is now in Cain's old room because when she moved out we turned her room into a storage area. We're having to move all of Cain's stuff out of his room so that she can get all of her stuff in there. After Christmas and everything settles, we're going to start cleaning out her room (and we're going to have one heck of a yard sale), and we'll move her back upstairs. She'll probably live here for two or three years, while she finishes school. And as you all know, that is MORE than fine with me and her Daddy. :)

I found out that someone I went to school with and have known since I was a youngster was killed in a car accident yesterday afternoon. Even though I haven't seen her in years, I was quite saddened by this news. She was about seven years younger than me, but I still have images of her sweet little sleepy face, getting on the school bus in the mornings with her older brother who was one of my good friends. I hate that this even happened at all, but hate it even worse to know that she leaves behind a five-year old son, and right here at Christmas, too.

My aunt, who drives the school bus that picks up my late friend's son, said that she put him on the bus yesterday morning, kissed him and told him that she loved him. And that will be the last time he ever got to see his mother. Oh, it just breaks my heart...

Gosh I'm so sorry to hear about your friend...even if you haven't seen each other in years, it still is a shock.

As for your house???
Hmmm.
Just tell everyone that you are redecorating!

I love the boob cream. Brooke doesn't need anything to enhance her beauty!

I know Rachel, Holly and I graduated together... it is terrible.
I have to go by the funeral home tomorrow.
So sad.