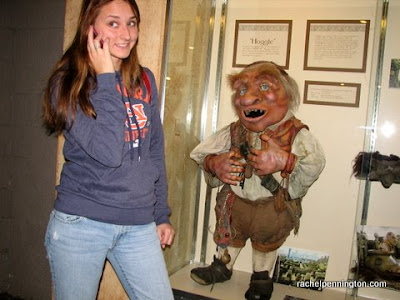 Brooke was too busy on the phone to have her photo made with Hoggle yesterday at Unclaimed Baggage. Hoggle was a character in Labyrinth (by Jim Henson) and found by the workers at Unclaimed Baggage when they opened a large crate stuffed with papers. I guess the Muppet Studios decided to let the store keep their find. Again, I'm not sure how some of this stuff could be forgotten or lost. Strange... There may be some folks that haven't heard of Unclaimed Baggage, but it has been featured on many a national news story. Check out the link above. :)

We took the tree down this morning (Brooke did about 95-percent of the work) and got the living room back to it's pre-Christmas stage. I usually take my tree down on Dec. 26, first thing. This year we were just slow about it. I still have all my snowmen out though, because even though Christmas is over, winter isn't. :) Now, if it would just feel like winter that would be wonderful.

I wish the day would've been longer.

Did you listen to the song I posted yesterday? You don't know what you're missing if you didn't.

Night!
Posted by rachelpennington at 5:06 PM

Yes I did and it is sad...wow. What a great song.
Thanks.

I'm scared to listen. You said it was sad. I avoid sad things.