Twilight Rocks! I Think...Maybe Not 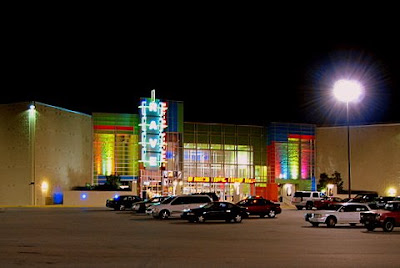 A really bad picture of the Rave Theater, which is where I went with my buddy Kandi today to see Twilight.

I had a good day today. Marshall and I were supposed to have headed out to get Brooke today, but as usual, our plans didn't work out. We'll head out whenever Marshall gets finished with this job that popped up. Glad for the job, not happy about having to put off getting Brooke's stuff up here.

ANYWAY, I got up early, showered, and drove to Chattanooga. I met Kandi at the theater, left my car there, and headed to Sams to do a bit of Christmas shopping. We left there and had lunch at Lupi's. It was deelish, as per usual. :)

We drove back to the Rave and watched a matinee of Twilight. Initially I really liked the film, even if it was teeny-bopperish. The more I thought about it though, the less I liked it. That's not to say I didn't like it, but it didn't go enough into the characters as far as I'm concerned. There should've been more Alice. :) And even though it was a two-hour movie, everything seemed so rushed. I hope the next film, New Moon, is better.

Kandi and I had a blast, as usual. We crack ourselves up and are pretty sure we should have our own tv show. ;) "And make that last one a small." LOL! Whew...

We left the theater and did a bit more shopping. I picked up the Dark Knight, and when I got home (which was a little after 8 p.m.) my honey and I settled in and watched it. He liked it as much as I figured he would. He knew immediately about....well, I can't tell you because if you haven't seen it then I'll ruin it for you, but anyway, he liked the film. :)

It's pouring down rain. I hope it lasts all night. :)
Posted by rachelpennington at 10:21 PM

It is 8am Thursday morning and it is raining. I LOVE IT. AND... I'm about to hit play and start watching Twilight. I'm such a bad girl, but at least now I don't have to go to the movies. I'd like to see it on the big screen so I'm too impatient.