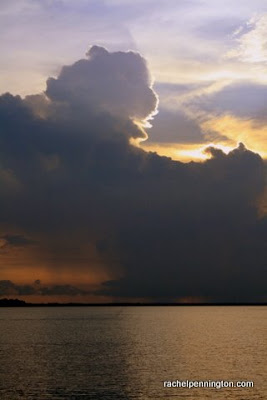 Today Marshall's sister and her family, and Marshall's parents all left. The week is just FLYING by. It doesn't even seem like they were here!

The guys all went fishing again this morning and Brooke and I rode over to Bald Point State Park again. On the way there we saw this beautiful corn snake in the road: 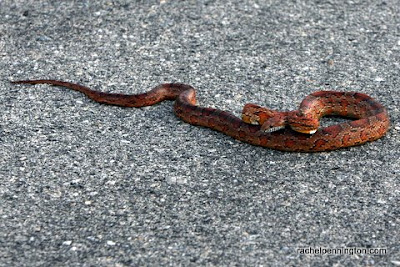 Brooke got out to move him out of the road before he got smushed and would you believe that while we were OBVIOUSLY RIGHT THERE moving the snake that this stupid idiot jerk of a man ran right over him and killed him? I was beyond infuriated. It still boils my blood to think about it.

Truly, I don't like "man" as a whole. I really, really, REALLY don't. There's something wrong with us apparently. WHY would anyone purposefully run over a snake (or anything else?), especially when it was obvious what we were doing? ARGH!

Other than that horrible incident, our day was a beautiful one. Before Marshall's parents left, we all rode over to Ochlockonee River State Park. It is SUCH a beautiful place. I saw the biggest grasshopper I've ever seen in my entire life: 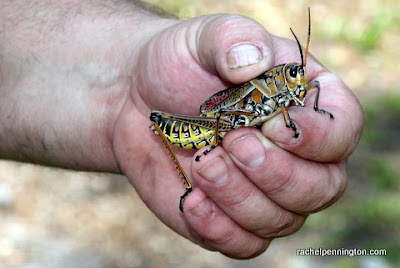 Can you believe that?! Marshall was so kind as to pick him up for me so I could get a photo of him in someone's hand rather than on the tree for perspective. He was beautifully colored. Marshall considered fishing with him and before I could give him the ol' "Oh heck no you won't!" speech, the park ranger told us that nothing would touch them--that they were apparently horrible tasting AND they stink. We put him right back on the tree where we found him. :)

We left there and after his parents left, we went over to a small aquarium just outside of Alligator Point. We got to see very interesting creatures from the sea there. It was fun. :)

We ordered pizza (which was delicious--thanks, Saldino's!) and now we're all just winding down here at the house. The guys fished again this evening at Bald Point State Park, which is just a couple of miles from down the road where we are staying.

It was a great day.

Posted by rachelpennington at 9:18 PM