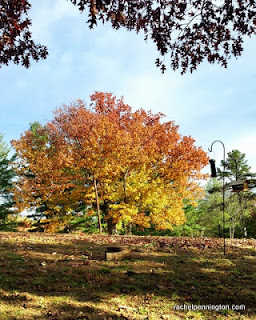 That's one of the trees in our front yard.  It would probably take four men to wrap their arms all the way around it. It's HUGE.

Last night Brooke called me. It was 1:30 a.m. She said she thought someone was in their garage. I told her to call 911 NOW. She did and I was a nervous wreck until I could talk to her again.

It was a bear.

I knew Florida had bears, but still, how scary is that?  It wasn't in her garage. It was in her garbage can which is right near her garage door.  The bear ran off when the cops pulled up.

I haven't felt too wonderful today.  I think it was from being scared out of my wits when she called (because I thought there was an intruder that could hurt her) and then not sleeping after her call. I napped but I still don't feel 100-percent. :(

I hope it's just from raking yesterday.

Night.
Posted by rachelpennington at 6:53 PM