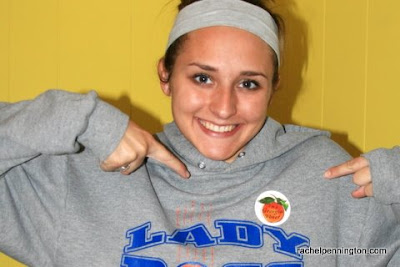 You probably can't read Brooke's sticker on here, but it says "I'm a Georgia Voter." On our way to the store this morning, we stopped by the courthouse and voted. I'm glad that we got that out of the way, and I hope we made the right choices. Want to know who we voted for? Too bad. :)

It has been raining all day long, and we're thankful for it. Other than getting groceries & voting, Brooke and I haven't been out of the house much today. Cain went to his old high school to visit his "old" coaches, teammates, and buddies, and Marshall ran around picking up parts for an upcoming job.

Last night several of Cain's friends from Trion came to watch Cain play, as did Michelle, Randy, and her father. It meant a whole lot to us to see them all there, especially since the drive to Rome is a 30-45 minute drive, depending on traffic). It was just very sweet to have them all come out and support him. We are blessed.

Brooke and I bought three pumpkins and she, Cain, and Marshall carved them this evening. I took lots of pictures of the three of them working on their pumpkins, and their pumpkins look great. We got a stencil kit, so they didn't make the traditional pumpkin faces.

This is Brooke's pumpkin, she made a witch (or a portrait of me): 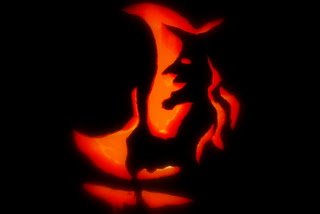 This is Cain's pumpkin, he made a skull with spider webs: 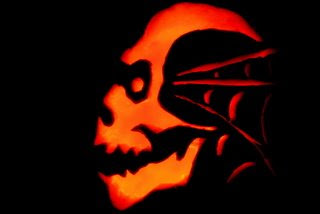 This is Marshall's pumpkin, he made the Headless Horseman: 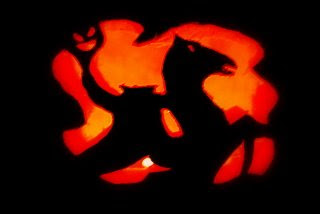 I'll get better pics of them tomorrow when it's not raining so that you can actually see the pumpkins. They're very cute. And Brooke is SO weird. She loves cleaning out the insides. *gag* THEN she likes to squish it all between her hands. So, so weird... 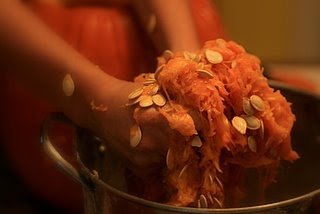 Anyway, they had loads of fun. I even turned on Halloween music on Music On Demand (one of the few nice things about Comcast Cable) to make it all official and stuff. ;)

Tonight we ordered pizza and stayed in and watched a scary movie. Of course, as soon as the movie was over, Brooke took off in the bedroom to read a book, and Cain went in his room to get on the phone. :(

I'm a dork. I didn't realize he was in town cause of a game or I would have tried to go. blah.

I like to put the pumpkin guts in the tub with me.

Jen! No way! That sounds fun. I like playing with them too. And roasting and eating the seeds.