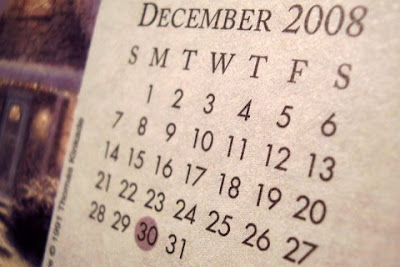 So I've taken a photograph EVERY SINGLE DAY for 365 days in a row. They aren't masterpieces by any means, but GOOOO me! I'm very proud of me for sticking with it. I still have one more day to go since this is a leap year, but sans me dying in my sleep (and boy would I be upset!) I'll finish the project tomorrow.

My pal Kandi popped my bubble when she told me to think about how happy I'd be if I'd stick with something worthwhile, like losing a hundred pounds. :( Anyway, you can see my Project 365 by CLICKING HERE

I'm so tired today. I don't know why. I slept SO good last night, but woke up at 4:22 this morning, terrified from a dream I had. In my dream, my family (the four of us) were standing in my bathroom and my hairdryer was in the floor. I was telling them to watch the hairdryer and then I said, "Ok, move it. Show them I'm telling the truth," and a ghost moved the hairdryer.

The hairdryer lifted up into the air and then the cord wrapped quickly around Marshall's arm. I was trying to pull the cord off of him, afraid the ghost was going to hurt him. Then the hairdryer cord turned into a spiral phone cord and the hairdryer itself turned into a phone. We watched as the numbers were being pushed (even though we couldn't see anyone pushing them). On the other end of the line was an elderly lady's voice, asking why we were doing this to her, and why did we send a ghost to her house. I'm laughing now and wondering to myself why I'm telling y'all this, but doggone it, at the time it scared the soup out of me!

I think I had the dream because I've watched the movie Ghost twice this month, and night before last we watched Mel Gibson fall in the tub with the hairdryer in his hand in the movie "What Women Want." AND we keep getting calls from telemarketers. I put us on the Do Not Call List but it takes 30 days to take effect. I'm surprised, we have had our home phone for less than two weeks and 90-percent of the calls have been from telemarketers! How do they find your phone number so fast?!

I made myself feel better by waking Marshall up and telling him to hold me. He grabbed my pillow out from under my head and held it instead, but, at least he tried, right?

See? I told you I was tired.

Ah... men who are supportive and loving when a nightmare happens. Gotta love them.

I went and crawled in bed with Tammy once when we lived together after a bad dream. Did it to Char a few months ago too. Poor Rowan, she will probably wake up one night and mom will be in her crib with her.

You should end your 365 with a cool group shot tomorrow!!!!!! Or Rowan and her mohawk. Or Marshall getting Marshalled. Or the last sunset of 2008... I like that one.

I love you SOOOOO much! I'm going to squeeze ya'll to pieces.